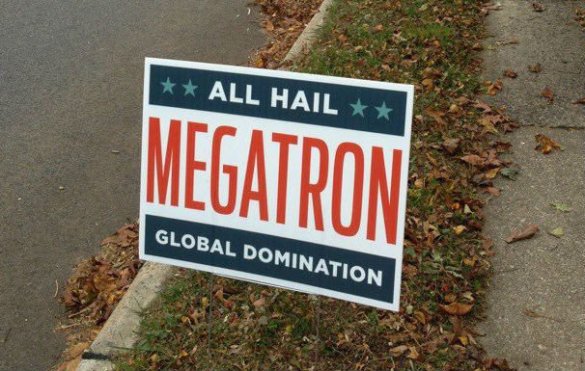 Wow. It’s been a long time since I posted anything on here. Over a year, in fact.

It’s been far longer since I voted though, because I’ve never done it. I’ve been eligible to vote for 20 years, but today I’ll vote for the first time in my life. You might think that’s irresponsible of me, but the fact is that I dislike politics, and I dislike politicians even more. Not once has there been a candidate or party that I’ve thought capable of adequately representing or running this country. “Vote for the one you hate the least,” people have said to me, but I don’t want that. I want to vote for someone I like. I want us to have an Obama. I’d vote for that guy all day long.

The fact that both of the EU campaigns have been run by politicians shouting the odds has really annoyed me. Neither campaign has showered themselves in glory in the run up to this referendum; both are guilty of scaremongering and, well, bullshit.

So, instead of listening to their ‘facts’, I’ve read as much independent coverage as I can stomach (The BBC’s Reality Check has been particularly useful) and I’ve made up my own mind. I’m voting to stay in, and it’s partly because I fear change, but mostly because I don’t like bullshit, and the Leave campaign has peddled way too much of it, from start to finish.

In an attempt to explain my reasons for voting remain, here are some of the Leave campaigns key reasons for leaving, along with my thoughts on each one. They might be wrong or ill-conceived, but that’s okay because they’re just my thoughts:

SOVEREIGNTY! We can take back control from these unelected bureaucrats. We can run our own country again!
I’ve got a few issues with this statement. Firstly, the European Commission only proposes rules. It’s up to our elected government, and our MEP’s (who we DO vote in and out) to either accept, amend or reject those proposals. So, if we’re getting rules we don’t like, maybe we should elect officials who will fight for the stuff we actually want and against the stuff we don’t? In any case, according to the House of Commons Library Report, the EU generated only 13% of the laws created from 1993 to 2014.

As far as I understand it, European Commissioners are indeed elected (albeit not directly by us) so the ‘unelected bureaucrats’ line doesn’t wash with me. Incidentally, we are at the mercy of a large number of unelected lawmakers, but they’re in the House of Lords in London.

IMMIGRATION! We can take back control of our borders, hurrah!
Except we probably can’t. I’ve seen posts on Facebook telling how amazing life is for Switzerland and Norway, who are in Europe, but not members of the EU. I’m not convinced – they’ve negotiated their own trade deals with the EU and, as part of those deals, both countries have agreed to the Schengen Agreement, becoming part of the Schengen Area. 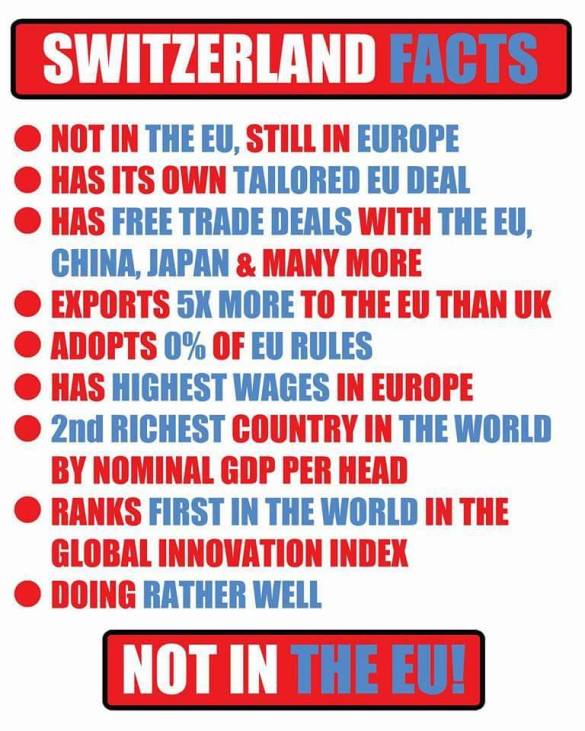 Switzerland FACTS* (*Does not contain facts)

In a nutshell, the Schengen Area consists of 26 countries which allow completely free movement of citizens between them. No borders or passports. No checks. No knowing who’s coming or going. At the moment, the UK has chosen not to be a part of the Schengen Area, maintaining our borders and the requirement for passports to enter and leave. Isn’t it reasonable to assume that, as part of any decent trade deal, the EU will require us to join Schengen, as it did Switzerland and Norway? Money talks, and if it’s a choice between either letting people in or not getting a trade deal, you can bet your elected officials will sell us out and sign the Schengen Agreement.

So, anyone who thinks we’ll be able to handle immigration on our own terms is, I think, in for a nasty shock if we leave the EU. 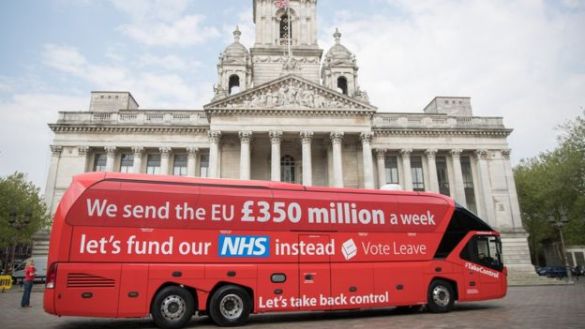 LOOK AT OUR BUS! We send the EU £350 million every week. Let’s fund our NHS instead!
Okay, first things first – that number is utter toss. We get about £4.5 billion a year back in grants. We also get rebates, which are applied straight away and are never even sent, so no – we don’t send £350 million a week, Boris. Our actual net contribution is more like £163 million every week. And here’s how it shapes up against the rest of the UK’s public spending: 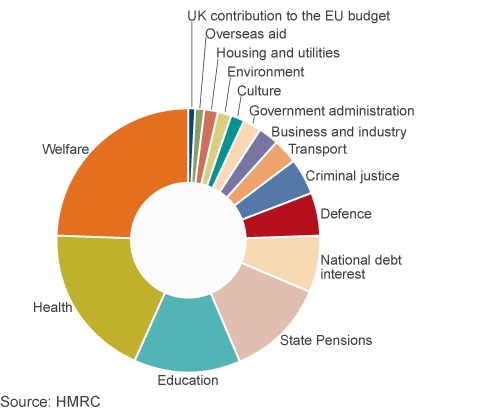 Not as much of a massive wedge any more, is it?

And secondly – do you REALLY think that our elected politicians, who have continuously cut budgets and run the NHS into the ground in the first place, will throw any significant amount of money at it, if they got the chance? The reason I’ve never bothered to vote is because they’re all as shit as one another. I can’t think of one UK government that’s done right by its people in my lifetime – why would they start now? I’d rather have a government that’s accountable to someone besides the public which it routinely ignores and defies.

BUT WAIT! Look at all these awesome people who think we should leave!

Now admittedly, there are a couple of wildcards in the ‘Leave’ list, like John Cleese, Michael Caine and Bryan Adams. For the most part, however, the list contains names that I either don’t recognise or cannot stand.

It has to be said, too, that the ‘Remain’ endorsements list has a couple of names that I couldn’t care less about (David Cameron being the most obvious). But, for the most part, it’s made up of people I like/respect/would dare to be seen in public with, such as:

The leave team hasn’t done enough to convince me that life would be better if we left. If anything, their rhetoric and propaganda has only pushed me further towards voting remain.

You see, I’m not a big fan of jumping onto a frozen lake to see if it cracks and I drown. It might not. But it could. And I don’t fancy drowning. For me, it’s a similar theme for the referendum.

Vote Leave say that, as the world’s fifth largest economy, we’ll thrive outside the EU. But will we? Sure, we might. But we just don’t know. How do we know that it wasn’t our membership of the EU which helped us become fifth largest in the first place?

They say we can make our own rules. Hands up those of you who like all the rules and policies our domestic governments have made over the years? Oh.

They’ve spent a lot of time saying how, once we’ve voted to leave the EU on June 23rd, we’ll set up our own points-based immigration system, just like Australia’s. But will we? Sure, we could. But where’s the guarantee?

Here’s my guarantee: I’m voting to remain on June 23rd. Also, no matter what the result of the referendum is, I’ll be happily importing my very own jobless immigrant next month, and there’s nothing Nigel Farage can do about it.