If there was one thing I would EVER advise a business or public figure, it’s that ‘Ask’ hashtags are usually a monumentally bad idea. There are exceptions, of course – if you’re one of the few celebrities or business who are universally admired.

I’m thinking of Olympic heroes like Jess Ennis, or an easily-lovable business like innocent drinks, who have a great twitter team and very few critics in general. Anyone else, no. Just don’t do it because it will not end well.

It’s a particularly bad idea, however, if you’re a controversial politician who clearly has no clue about how social media works. Enter (possibly on all fours and purring) George Galloway MP. But it’s okay – George had a strategy.

Yep. George decided to run an #AskGalloway hashtag on Twitter but, when the inevitable happened and the whole of Twitter began to take the piss (as they always do, no matter who you might be), Georgie just did a Cheggers and started blocking. Everyone. But he replied to some of them first. Throughout the course of the evening, he didn’t answer one serious question (save, possibly, to comment that Louise Mensch ‘marches to a different drum’). He did, however, manage to tick off the following:

A mix of casual namecalling and mental health stigmatisation:

Resorting to ‘I’ve got more followers than you LOL’: 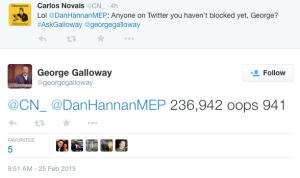 And whatever the hell this is:

Assuming he means ‘Altar boy’, I can’t even begin to guess what form of derogation this might be.

But the one that really pissed me off was this one: 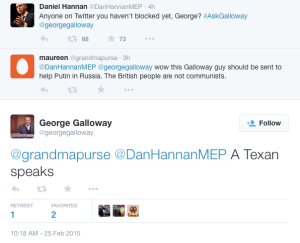 As some of you might know, the person I love most on this planet is a Texan. She’s tolerant, liberal and intellectual. And I’m not just saying that. She has the highest moral values of anyone I’ve ever known. And so naturally, I wanted him to expand on exactly what he meant:

…At which point, he promptly blocked me.

In the interests of full disclosure, I should also point out that I took part in the widespread hijack of the hashtag with a few comedy tweets, none of which were offensive. They’re here: Tweet / Tweet / Tweet / Tweet – but I wasn’t blocked until I tweeted and challenged for him to explain his prejudice, as above. I’m also not in any way interested in politics, so I’m not some Tory smear campaigner or whatever. They’re all idiots in my view.

So, anyway. I wasn’t sure if his ‘Texan’ tweet constituted racism at first. Having thought about it a little, I don’t think it does – the term ‘race’ doesn’t relate to a person’s nationality or home state, it’s more their physical attributes. However, it’s my opinion that George Galloway’s comment was xenophobic and bigoted. Not to mention the other pretty outrageous statements he made.

When you consider that Emily Thornberry was forced to resign following a tweet that contained an image of a house adorned in England flags, along with the caption ‘Image from #Rochester”, how is it acceptable for Galloway, an MP for the so-called ‘Respect Party’, to post such a range of bigoted statements publicly and expect not to be challenged about it?

He may argue that it was his interpretation of fact (despite the fact that the lady he replied to was in fact a native of Carlisle and now lives in Washington State), but he must then apply the same logic to all his other tweets, which I think would be difficult. Alter boy [sic]? Broadmoor?

It’s therefore clear to me that ‘A Texan speaks’ was intended as a derogatory remark, and I want to know why he would think that’s the case.

Luckily, George is hosting some kind of public meeting this Saturday about 20 miles from where I live. I’m thinking I might show up and ask him – respectfully, of course – to explain his responses tonight, in particular the one about Texan people.

I might even offer him some free social media advice – although it’ll mostly consist of the words ‘Just’ and ‘don’t’.

tl/dr: George Galloway is a bigoted dick who doesn’t know the first thing about social media.