This week, I saw something in social media which was so unbelievable that it actually prompted me to start this blog. It’s the story of Amy’s Baking Company (ABC) in Arizona.

The story started back in August 2010, when a customer named Joel LaTondress ate at Amy’s and was underwhelmed by the experience. As he was entitled to do, he shared his experience on Yelp. Owner and chef, Amy Bouzaglo, responded with a jaw-dropping tirade of abuse, complete with accusations that he worked for a competitor (Check out the review and response HERE).

The exchange was posted on Reddit, growing in popularity and causing a headache for Amy and Samy – her husband/co-owner. Business suffered and so, when the opportunity arose for high-ranking celebrity chef Gordon Ramsay to help them turn their fortunes around with an appearance on Kitchen Nightmares USA, they jumped at the chance.

Undoubtedly, Amy assumed that Gordon would taste her delicious food, tell the world that there was nothing wrong with it and that they didn’t need his help, then skip merrily off into the Arizona sunset. Roll credits.

Yeah, that’s not quite how it went down…

[Edit: Channel 4 are clearly trying to ruin my life and keep blocking the YouTube videos of this episode, on UK regional copyright grounds or some such gubbins. I’ll keep trying to find versions that aren’t censored, but I can’t guarantee that it’ll work. Sorry about that.]

The episode’s 40 minutes long, but seriously – you need to see it. I sat watching open-mouthed through most of it. I actually thought at one point that it was a spoof. If you really don’t have the time to watch it, here’s a brief overview:

Amy is a brilliant chef – in the same way that many cringeworthy X Factor audition attendees are wonderful singers. She believes that her culinary creations are epic and refuses to accept any suggestion to the contrary. Before Ramsey arrives, she and Samy are filmed fighting (almost literally) with unhappy customers – telling them to ‘fuck off and don’t come back’. Gordon rocks up and, not surprisingly, thinks the food is shit. Not surprisingly, Amy and Samy disagree.

For the first time ever, Gordon Ramsay admits defeat and leaves without completing his mission. Add that to the fact that the ‘freshly prepared’ food they serve is often bought in and reheated, plus the owners keeping the tips meant for their staff, and you get a pretty amazing thing to watch.

And that’s when the floodgates opened. Social media exploded after the show aired. Amy – bless her – exploded right back: 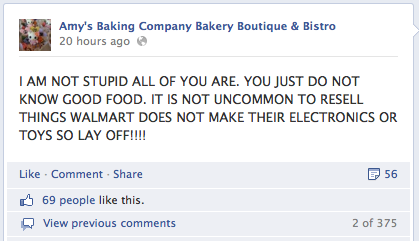 She starts by calling visitors to their page ‘stupid’ – then takes it up a notch by calling Gordon Ramsay ‘horrible’ and claiming some kind of divine right to act like a complete cockwomble. She also threatens to procreate:

Then she just goes all-out batshit, referring to her cats as her ‘kids’ and claiming to be a 1970’s comic book hero:

Finally, Amy & Samy just resort to abusing anyone and everyone:

As the story picked up traction, it spread across to Twitter and quickly went viral. Eventually, the page changed and all the venomous posts were replaced with one taken directly from the social media disaster handbook:

Naturally, it’s been met with a degree of scepticism by the entire internet – me included. This post was followed by one which announced a ‘Grand Reopening’ and gave clear indications that they’ve FINALLY hired a PR firm, who have no doubt advised them that swearing at customers on your official Facebook page is frowned upon.

Remarkably, a new ABC support page has appeared, posting compliments about Amy and her batshit bakery, as well as firing a wide range of insults at Gordon Ramsey and abusing sceptics with wild abandon – all in an oddly-familiar tone of voice. Hmm.

My view (the long version)

Anyone who knows how the internet works should know that it’s predominantly fuelled by the fires that burn in the guts of trolls across the globe. Some of them have a gripe against the page’s owner, many are just like-whores who add their ‘witty repartee’ to a post, in the hope that they’ll be accepted by their peers with a symbolic ‘like’. Some of them are natural born tossers, but most are just bandwagon passengers. Whatever the reason, the hills of the internet are alive with the sound of trololol.

As you probably know, I’m an admin for the O2 social accounts, including the Facebook page. Being an admin is hard when the trolls are out, admittedly – but you absolutely cannot just turn around and outright abuse them. You need to use your noggin.

You may remember that in July 2012, we had our fair share of, um… ‘negative sentiment’ in social media when the network suffered an unprecedented failure, leaving a fair few customers without service for several hours. Understandably, people were mad as hell, and they told us so. The vast majority of them kept it fairly civil, although there were some who just went over the top and took trolling to the next level, hurling vitriol for shits & giggles without even mentioning the network issue. The abuse got more and more obscene until one guy took the biscuit, suggesting that we go ‘arsefuck your mothers, you twats’.

And that’s when I kinda lost it a little bit. At this point, I can *almost* kind of empathise with Amy and Samy – the levels of abuse were getting pretty extreme and, as a fiercely loyal advocate of the brand, it was almost impossible for me to avoid taking it personally. But I saw the line, stopped, and thought for a minute. If I jumped across the line, it’d spell disaster for the brand I care so much about, followed by P45-shaped disaster for me. No ta.

But this dude needed something a little sharper than our cotton wool tone, so I took a deep breath, stuck my toe across that line and hit him with a rather dry ‘She says no thanks.’ And that was that. I’d got it out of my system and was ready to carry on as normal. The end.

Except that it wasn’t the end. It got picked up by various people and news outlets, and things went a little crazy. People LOVED it, and I couldn’t really understand why – I’d basically trolled a troll – something that wasn’t in the book. We’re told that a brand should never retaliate. But we kinda did and it worked, so we built on it, adopted a new lighter-hearted tone where appropriate and somehow managed to mitigate a full-scale PR disaster.

The difference between our response and that of Amy’s, however, was rationality and restraint. Whereas we quietly deflected a snipe from someone acting unreasonably, Amy loaded a shotgun and blasted it repeatedly into the crowd. I think a huge part of successful crisis communications is being human, but not TOO human. There are some human traits that simply don’t suit any brand’s persona. Empathy does, though – always try to understand what’s motivated their comment in the first place, and don’t ever demean that motivation.

Directly abusing someone as a brand is never a good idea – saying something like ‘We would, but we’re too tired from seeing your mum’ would’ve been an Amy’s-esque suicide run, whereas ‘She says no thanks’ shot down the troll without actually returning fire.

The key to social engagement is matching someone’s tone – but only as far as ‘the line’. This is where Amy’s went horribly wrong. They saw the line, screamed at it to fuck off and ran past it whilst babbling about cats and Wonder Woman.

My view (the brief version)

Amy and Samy Bouzaglo shouldn’t be allowed within a mile of the internet. Or an oven.