I’m lucky enough to work for a company that’s always been pretty forward-thinking about PR and social media. Because of this, I have a certain admiration* for other businesses when they really get that stuff right.
*jealousy

The latest Three campaign – #SingItKitty – has me fuming, simply because they did it and we didn’t. It’s genius – catchy, infectious and the kind of thing you feel compelled to share. Then there are the players who are great at social media; from the whimsical brilliance of Innocent Drinks to the sassy awesomeness of my colleagues over at Tesco Mobile. And then there are the ones that gain their notoriety by sailing close to the wind. Like Paddy Power.

To date, I’ve liked pretty much every stunt that Paddy Power have pulled. Most recently, they crashed the red carpet at The Brits with Daft Punk impersonators, decked out in Paddy Power Y-Fronts. It had all the traits of a great PR campaign – bonkers enough to make people talk about it as part of their ‘did you watch The Brits last night?’ conversations at work the next day, but not stupid enough to prompt a ‘wtf?!’

In 2012, they flipped the middle finger at one thing that frustrated PR people at almost every brand in the UK (including me. ‘North Greenwich Arena’?! Ugh). In the run up to London 2012, I remember reading a brief on what non-sponsors could and couldn’t say. We jokingly referred to the event as ‘The O word’ around the office. Paddy Power? Not one shit was given. They found a way around it and pulled off a brilliant trick:

Also in 2012, they hired a skywriting team to post ‘Sky Tweets’ above Medinah, Illinois, where the Ryder Cup was in full swing. The messages, such as ‘Tiger loves a bit of rough’, had me giggling at my desk. They ventured up to that ‘line’ I’ve spoke of in previous posts, but stopped short of crossing into outrage territory.

This week, if I worked at Paddy Power, I’d wish I was in outrage territory. They’ve sailed right through that town and out the other side: 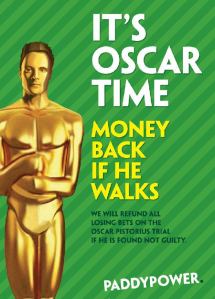 For some unknown reason, they thought it’d be a good idea to take bets on the outcome of Oscar Pistorius’ murder trial, with a refund if he’s found not guilty. Not only that, but they’ve also chosen to promote this decision far and wide, using both print and social. And, just for good measure, they decided to poke fun at the double-amputee’s disability, incorporating the line ‘if he walks’ into their copy.

Confession: Personally, I’m not offended by it. I don’t find it funny and I consider it to be in bad taste, but I’m pretty thick-skinned and laid back, so stuff like this doesn’t really upset me. Unfortunately for Paddy Power, not everyone feels the same way.

There are people out there who do find it genuinely offensive and upsetting. Then, of course, there are the professionally-offended – those who occupy social media, looking for a bandwagon to leap on, just for shits & giggles. Admittedly, some people think this campaign is hilarious. But they’re generally the same people who are amused by many of the news stories that the rest of us find disturbing, like the Madeleine McCann disappearance – the professionally-offensive.

For the most part, though, the People’s Republic of Cyberspace thinks that it’s an idiotic idea, and this is the point at which I get confused. From a PR perspective, I’m baffled as to how a group of people sat down at Paddy Power HQ and talked this proposal over, without a single one of them stopping to consider that this was one of the stupidest ideas ever conceived. HOW?

I’m not a betting man – my gambling expertise begins and ends with a few (not so lucky) Lucky Dips on the lottery – so I’m certainly no expert on wagers. Looking at various websites, though, I can see that it’s possible to bet on almost anything these days. It’s far from being limited to sport; you can place a bet that Tom Hiddlestone will be the next James Bond, that Zuckerburg will be succeeded by his first-born child, or that Julian Assange will leave the Ecuadorian Embassy using a jet pack. I’m not even joking.

It seems that people will bet on anything and, with that in mind, I can kind of understand why they’re offering odds on the outcome of the trial. They’re a business after all, and a gambling business at that; an industry which isn’t exactly known as the hub of moral responsibility. What I don’t understand is their choice to publicise it. This is the kind of bet that they should’ve kept a dirty little secret, visible only to those who know how to explore the obscure depths of their website.

For whatever reason, right or wrong, they chose to offer odds on something that would likely appeal to gamblers. But, given that the wider audience would consider it to be way off-key, there was absolutely no right reason to serve that wager up to the general public – it should’ve been obvious that it’d cause an outrage.

Since the scandal broke, a petition has been set up, urging Paddy Power to cease bets on the trial and make a donation to a women’s charity. Started it around midday on 2 March, it’s gathered over 118,500 signatures at the time of writing – after 60 hours. That’s almost 2000 signatures per hour, and that’s the kind of public opinion that no PR campaign ever wants to attract.

Amazingly, Paddy Power appear to have have remained utterly silent on social media about the whole thing, even apparently blocking a twitter account which supports abuse victims. In my view, ignoring the problem is the worst thing they could possibly do. They need to wake up, smell the outrage that’s relentlessly unfolding over them, and fix it. They’ve already tainted all the great work that they’ve pulled off in the last few years, and they need to act fast to avoid tainting their reputation as a business, possibly forever.

The ASA ruled that the advert was offensive and ordered Paddy Power to remove it. Obviously.

tl;dr – Paddy Power have offered a refund on the Oscar Pistorius verdict ‘if he walks’. Now they’re getting trampled by the internet, and definitely ending their run of great PR stunts.